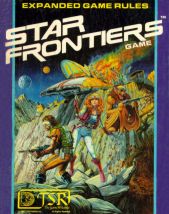 Star Frontiers is once available again.  Also there are Star Frontiersman and Frontier Explorer downloadable magazines.

This is from the expanded rule book on page 58, the Sample Adventure.

The river after an area of trees continued to curve up the gentle terrain.

A few hours later, the river turned into a swampy area. The swamp edged north and south as far as could be seen on both sides.  Ahead west however he could see patches of land and what looked like solid land on the other side. The river seemed to continue further on the other side.

Ethest pulled out his pocket computer and checked the map. The swamp would severely add hours to his journey if he skirted the outside.

Ethest decides to try crossing the swamp directly instead of walking around. He also still has a time limit somewhat, and light wouldn't be around forever.

He could see several dry mounds scattered throughout the swamp. He could maybe speed up the travel time by moving from island to island. But who knows what was in the swamp.

He readied his laser pistol, secured his backpack, and headed towards the swamp.


After a few observations and some calculations, he manages to figure out a reasonable path. He could see a series of smaller islands off to the left, which seemed to travel in the direction of a few larger islands in a chain going towards the western side of the swamp.

Almost immediately he found himself stuck in mud. The frogs creaked, insects buzzed, and sounds of movement surrounded him as he realized his boots were stuck.

His heart beat louder in his ears.

He'd better try to get out again. Taking a deep breath of the stinky swamp air, he tried again.

He heard a suction slush as he forced his boot out of the mud at a different angle. Finding a less muddy area, he freed his other foot as well.

After a brief pause, he looked ahead, found his path, and continued on.

This time, the mud was less deep and he made his way from one small island to the next.

As he was approaching one of the islands it began to move.

That wasn't an island.

His heart returned to a rapid pace. He froze on instinct as the rapid movement of two things that he had mistaken for reeds began to flutter.

Soon the head of a Slither turned towards him. He better not move.

The Slither's head moved side to side looking for whatever was moving.

Ethest tried not to move, not a single movement, not even a breath.

Suddenly a sound splashed from over his right in the distance.

The slither sprang quickly, all of its legs and body pushing and slithering towards that sound.

He heard a loud chirping sound, a sound of the rushing Slither, and a splash.

Slowly he turned his head. The Slither had caught something.

While it was distracted, he slowly continued on, hoping to create some distance between himself and the creature.


He easily made his way across several of the islands.

At the larger island, he thankfully pulled himself on the the larger of the islands. He drank from his water container, took a brief breather, and then continued on.

Not only was the  rest of the swamp easily traveled, he also found some edible berries which helped him replenish some of his strength without slowing down his travel and time. He ate enough to fill his stomach enough.

Despite the troubles and surprises earlier in the swamp, he ended up at least cutting his travel time in half compared to travelling around the swamp.

The stream or river continued gently up the valley, more oil streaming down the flow from upstream.

Several hours later, nearing sunset, he spotted something large and metalic sticking out from foliage ahead.

Nearing the object, he could smell the scent of oil, fuel, and something burnt.

It was the engines, buried into a hillside.