The next writing exercise comes from Spellbinding Sentences for the basic practice #2.

The entire purpose of this exercise is to help increase the number of words (vocabulary) that have personal meaning to a writer through conscious focus, reflection, and time to get to know and care about words.

For this exercise, I will text to voice a science news article found on my Google Science News page.  "William Shatner Takes Playful Jab At 'Star Wars' Over 'Starfleet' Symbol Found On Mars". As the voice reads the article, I will jot down if any words stand out to me in the article.

Next, for this list I will pick out three of them to define and add a thesaurus entry to, commenting on the entries after each pool of information is presented. The commentary helps to personalize these words for me, the writer.

\Sym"bol\, n. [L. symbolus, symbolum, Gr. sy`mbolon a sign by which one knows or infers a thing, from ? to throw or put together, to compare; sy`n with + ? to throw: cf. F. symbole. Cf. {Emblem}, {Parable}.]
1. A visible sign or representation of an idea; anything which suggests an idea or quality, or another thing, as by resemblance or by convention; an emblem; a representation; a type; a figure; as, the lion is the symbol of courage; the lamb is the symbol of meekness or patience.

So, the basis of the word symbol came from known things thrown or put together. A person can know or bring forward (infer) things—maybe memories, feelings, beliefs, thoughts, and even action based on symbols.

One symbol that I have always liked is the Yin Yang (太極, tàijí). To me, this is not just a symbol of oppositions, it is a symbol of infinite mixes of possibilities. 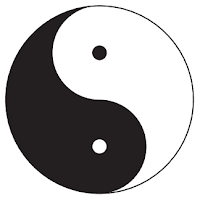 CC BY-SA 3.0
by John Langdon
\Cap"ture\, n. [L. capture, fr. caper to take: cf. F. capture. See {Caitiff}, and cf. {aptive}.]
1. The act of seizing by force, or getting possession of by superior power or by stratagem; as, the capture of an enemy, a vessel, or a criminal.
2. The securing of an object of strife or desire, as by the power of some attraction.
3. The thing taken by force, surprise, or stratagem; a prize; prey.
Syn: Seizure; apprehension; arrest; detention.

So capture is seizing or taking by force or attraction. Capturing can be physical, social, emotional, financial, or spiritual. Literally, I captured these words from the science article.

\Life\ (l[imac]f), n.; pl. {Lives} (l[imac]vz). [AS. l[imac]f; akin to D. lijf body, G. leib body, MHG. l[imac]p life, body, OHG. l[imac]b life, Icel. l[imac]f, life, body, Sw. lif, Dan. liv, and E. live, v. [root]119. See {Live}, and cf. {Alive}.]
1. The state of being which begins with generation, birth, or germination, and ends with death; also, the time during which this state continues; that state of an animal or plant in which all or any of its organs are capable of performing all or any of their functions; -- used of all animal and vegetable organisms.
2. Of human beings: The union of the soul and body; also, the duration of their union; sometimes, the deathless quality or existence of the soul; as, man is a creature having an immortal life.
3. (Philos) The potential principle, or force, by which the organs of animals and plants are started and continued in the performance of their several and co["o]perative functions; the vital force, whether regarded as physical or spiritual.

Life can be actual breathing and physiological or also philosophical through functioning or performance. In the Philippine language after asking someone how they are doing, the expression buhay pa ako is common which means, "I'm still alive." To me, it reminds me of being with friends and families that are experiencing difficulties in life. Despite all of the living struggles—even for minimal necessities of life—being still alive is a feat in itself.

This was a very fun exercise, more than I had planned. I can see how doing so helps to personalize and store up a word collection that have greater meaning. After submitting this blog post, I am going to go back and do the same for the other words on the list. I will not write down that information for speed-sake.
Posted by KW at 11:56 AM