In this Dice, Cards, and Probability Series
In Part 1, I looked at probability, notation, number of occurrences.
In Part 2, I looked at linear die/dice (single) results

Having seen what a single die/dice of can role and compared them to each other in the prior post, I wanted to spend this post looking at specifically the d12 and a potential framework for using it. In a similar manner it and any other based dice can construct similar mechanics.

To compare mechanics, I will either use open source or unrestricted single systems by name, or mention summaries of copyright systems only by reference to a created summary name, not their proper names.

The first mechanical difference seen between systems is that many are roll-over systems. However, there are a few roll-under systems. After that, I focus on the core mechanics of modifiers (bonuses and penalties), proficiency/skills, and then the difficulty ladders.

Rolling over or rolling under

Systems are either of two types. Rolling over and rolling under a certain value. Also the system must address what rolling equal to that certain value means.

The roll over system either compares against another character's roll or a target number based on difficulty. The roll under system normally uses the base state + skill as the number to roll under. Both types are modified with bonuses and penalties.

We will look at two roll over systems (a converted d20 and a full d12) and then a d12 roll under system.

Modifiers for abilities, skills, proficiency, and situations can be also applied either to a roll or a target number.

Target/difficulty number in both systems

In a roll over system, a chart of standard target numbers by difficulty must be created. This is used to figure out what number must be rolled over when tasks must be accomplished when not competing against another sentient being. In those competing tasks, the target number is rolling against the other being.

In a roll under system, difficulty is normally a modifier to the stat + skill basis.

A summary of the linear graph can be shown in this image. We can compare this probability chart of rolling 1d12 to other types of rolls. 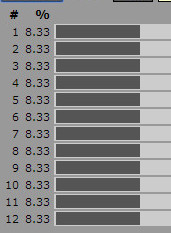 Starting with the latest of the d20 systems, 5th edition is the newest incarnation. It is based on a d20 as mentioned. The main modifier is the Ability Modifier, based on an ability score that is normally from -5 to +5 but sometimes is up to +10. That modifier is added to the roll and compared to a target number. Proficiency bonus from +2 to +6 is given for select skills. For skill checks, the target number is in increments of 5 up to 30, for a total of 6 degrees of difficulty. 5e (fifth edition) is a modified roll equal to or over the target number to succeed type system. For contest checks, each side rolls and modifies. The higher number wins, and ties means the situation remains the same. For combat, armor type bonus called armor class, Dexterity bonus, and a few other defensive bonuses determines the basic target number that the players need to roll equal to or greater to cause damage. Spells are automatic as long as conditions are met, except for some that require attack rolls and resistance rolls, which are also based on  the ability modifier.

This is a conversion of to parts of the mechanics that go with the dice rolls. The bonuses are added to the rolls based on what activity or skill designates the ability bonus (str, dex, con, int, wis, cha). Unlike the d20 previous versions, 5e doesn't have individual skill bonuses added on top of that, but rather uses a proficiency bonus for certain proficient skills. The bonus conversion chart can also be used to find the proficiency bonus.

If an advantage is judged to be in effect, the higher of 2d12 results is used. As you can see, the probability is no longer flat. Instead it leans more towards the upper numbers. 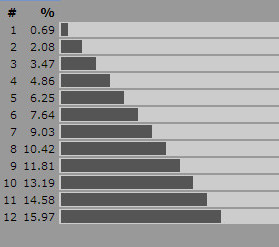 If a disadvantage is judged to be in effect, the lower of 2d12 results is used. As you can see, this is opposite of the Advantage roll. Now the results lean towards the lower numbers. 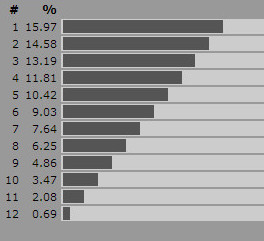 For this system, parts of it seem d20 related and part seems Fate related. First, comparison to the d20 conversion seems appropriate.

Instead of a d20-like attribute and proficiency system, it uses instead a +1 or +2 bonus very Fate-like. It does use however the advantage and disadvantage 5e roll system.

The limit to normally +2 bonus and proficiency limits the 'impossible' skill level to 14 max (roll 12 + 2 bonus).

Another d12 system uses the ability stats as a basis for a roll under system. Stats begin at 1 and can go above 12. Rolling a 12 however is automatic failure, so increasing above 11 only helps offset situation penalties.

Attributes in this game normally range from 1 to 4. In this other system they are permanent after initial character creation. Skills on the other hand can increase higher. Their chart goes up to skill level 12. They can be increased through spending points awarded from adventures.

Although they do not have a comparable difficulty chart. A modifier chart can be constructed based on the samples of penalties.