2016 World of the Fifth Sun summary 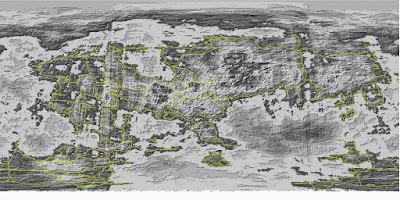 I had been working on Aioskoru languages as well, revealing that I had 175 elfin and orcish words in mid January. These words would expand along with Common, Goblin, Dwarf, and Halfling throughout this year in spurts.

In February of 2016 I returned to FAE, which I had paused studying due to RMU the summer before. I considered bidirectional approaches.

In March, my Quick free world maps using GIMP filters and Donjon fractal maps. I used a new technique to make more accurate 3D maps than the prior methods I had tried, using grayscale maps. 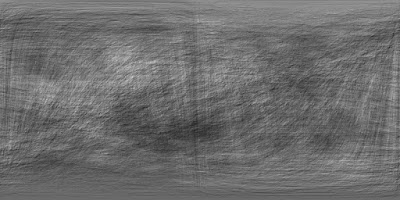 I also started my Dice, Cards, and Probability series of posts.

In April, I began my A Basic System 12 (ABS12) system creation. I did this to give me a system that I could fool around with different mechanics. The entire series of posts shows my struggles, victories, and problems creating a system from scratch. Although the current system might not be entirely polished nor great, however I think the actual value is within the process posts. It's sort of a journal showing how they came to be.

In late April, I wrote a post that would serve as a basic model to me when comparing different game system attributes. I tried to fit together a Master chart of attribute words used to describe characters and monsters. Attributes, skills, and special gifts 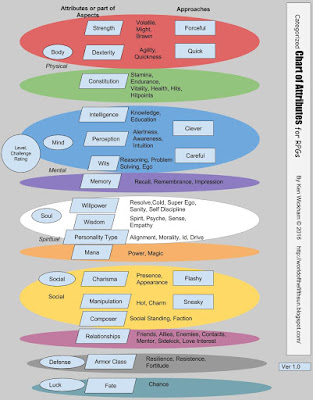 In May, I wrote a post that would influence how I set monsters up for Aioskoru World Guide monster list. In my Looking at OGL stat data: Black Bear eight Open Gaming License (OGL) systems were examined comparing Black Bear stats.

Also in May, I started the series that would become the book Stories vs RPGs. In it, I compared character approaches, theory, and methods in story writing vs role playing games. 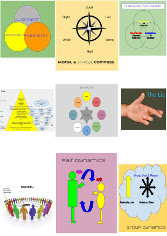 In late May, I created my ABS12 Solo Game Engine and Fact Generator. 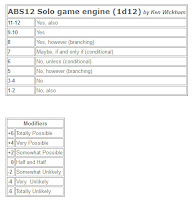 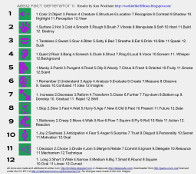 I wrote a microfiction piece "Bargain for Eternity" at the end of May.

In June I began writing a RPG and Story Scenes. This is a short series that I hope to do more with at a future time.

In June, I started what would become In search of Centaurs using the ABS12 system.

In July, I wrote my Test Played series using the game information that I had gathered in the Search for a current fantasy main system process.

I released the book Quick free world maps using GIMP filters and Donjon fractal maps on July 4th which included all of my blog post and a few new sections unique only to the book such as how to create the topographical maps and how to alter the biome maps to add new symbols. This was my first RPGNow book listed.

I also created some JAGS content such as some NPC templates, wild west creatures, and a d20 to JAGs conversion.

July also saw my experiment with maps return, with me trying to find a way to figure out rivers quicker. This lead me to experiment with wilbur which resulted the map below which is the area for In Search of Centaurs story in Western Ekouinmanus Kapos. 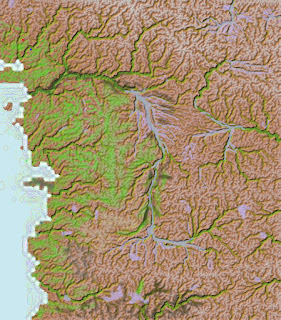 In August, I began my Fantasy Constructed Languages series where I try to create a Fairy/Celestial language. Unlike the Common, Goblin, Elf, Orc, Dwarf, and Halfling this would be a constructed language entirely created from the sounds on up to the grammar. This series lets you look into my journey from a blank slate and see how I've created 194 words so far with some grammar rules and sentence structure.

I also released the Aioskoru World Guide, ABS12 Flexible Solo Game Engine, Aioskoru OGL maps, ABS 12 Fact Generator, In search of Centaurs, and then Aioskoru World Atlas. Although it may appear that these were created simultaneous, really they had been in the works since late of October of 2015 - most of the work taking place at the end of 2015 in October to December, as mentioned in the last post. They had been on hold for several earlier months of 2016 while I looked into some theory and practiced game design. The Aioskoru World Atlas has some of the river techniques only recently discovered at that time. 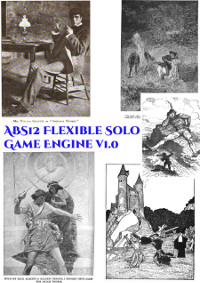 In September after an agreement with a partner Peter Rudin-Burgess who had created the first region of Aioskoru which he that he named Melos. We created a project named 5e x 5 to convert 5e SRD into a d100 attribute and skill based system.

For two months all other projects went on virtually on hold. Most of my posts at that time concerned either 3.5e or 5e, except one fantasy language post.

At the end of the project, we released the 5e x 5 OGL SRD using a kickstarter like tier system. We did the tier system to help generate contributions even though the actual SRD was PWYW. Keeping the system OGL and free if need be is the spirit of both Aioskoru and 5e x 5. 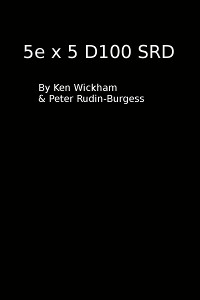 The motivational draw that I presented for contributors was an unavailable 5e x 5 Modern and Future conversion, which I began in November.

We released a collection of Peter and my blog posts named 5e x 5 Ezine #1. In addition, for contributors, we offered 5e x 5 Fantasy Weapons & Armor II as a motivational draw to contributors of the ezine.

We released a two-column version of the 5e x 5 books priced individually or by bundle with some savings.

That two-column version has received background images in the fantasy Character book and in the Spells book.

In the next post I'll look at the next year and future current goals of World of the Fifth Sun blog. Ken Wickham
Posted by KW at 9:40 AM