Part 2: Getting different types of maps

In the last tutorial in part 1 (here), I showed you how to find a map, record the seed #, change the water and ice levels, make layer, and make 3D top perspective maps using GIMP.

With that seed that you recorded in part 1, I will now show you how to find additional types of maps for your world.

Although they look very similar, this tool will create different types of maps. It will not create the grid or biome terrain maps.

It will create polar and other maps. 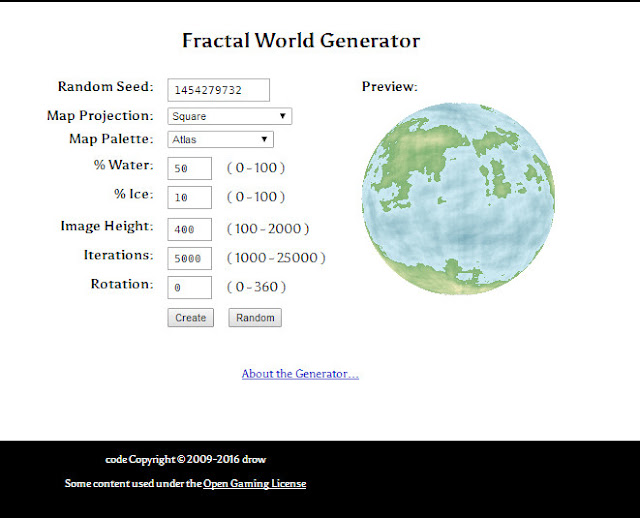 Verify that you have the correct map, change the seed #, % water, # ice, and iteration to 25000 settings to find that map.

Now that you have the correct seed and settings, you can now find more maps for the same world.

Atlas is the default view
Mercator cuts off the poles and creates linear longitude distance lines. This will stretch the east west land forms as the distance away from the equator increases. It will look very similar to your first map.
Transverse Mercator uses the current rotation longitude as an equator and piles the world horizontally around that longitude showing both poles. So it acts as a vertical map, instead of a horizontal map.

Icosahedral shows how the polar areas could be unpeeled if more 3D diamond shape, instead of a flat world to account for the polar distances.
Mollweide Maps use an oval instead of the peeled diamond shape
Sinusoidal maps use a combination diamond and oval shape.
Spherical maps will create two hemispheres depending upon where your Rotation setting is set. My 0 degrees is center of the first hemisphere. 180 degrees is center of the 2nd hemisphere. If you change the Rotation setting it will put center whatever your rotation in degrees and center the 2nd will be the opposite side of the world. Remember to save both spheres if you are saving them with different names to your world folder.

Three types of Polar Maps
Polar Orthographic, Stereographic, and Gnomonic. I will only post the first one.

Animated Map
I skipped over and will do last because it takes up more space. I will only show a 100 pixel version of the world. You can build yours with a larger height and size. Be aware that large animated GIF globes will take longer to load and take up more space. Now you can see your world alive and moving.

Use the part 1 tools on these new maps

With many of these maps, you can use the techniques from part one to make layer and 3D maps.