Through several blog postings, I will show the techniques and free tools that I used to generate maps for Aioskoru, I new world that me and a Rolemaster blogger Peter R are using to create an Open Gaming License (OGL) world for Rolemaster (RM, RM2, RMC, RMSS, RMFRP, RMX), HARP & HARP Lite, MERP, D20 SRD, and PFSRD primarily. It is a fan-based world, not affiliated with ICE, AA, or GPC. For more information on Aioskoru, you can see the site at https://sites.google.com/site/aioskoru/.

Hours upon hours of map making, isn't something I wanted to invest my time doing. In this case, what my world looked like wasn't preconceived. I just wanted a neat looking world with interesting land forms. A little research, some ingenuity, and experimentation has helped me streamline world creating at least when speaking about skills and abilities.

The first step is you need the basic fractal map.

First, I went to http://donjon.bin.sh/fantasy/world/. There a random world is shown. 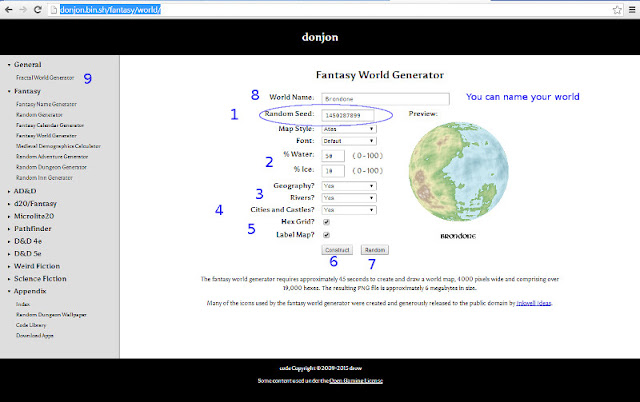 Overview of settings for using the map generating page

Hitting the return key [enter] at any point will cause the map to begin to generate. When you enter data, it is best just to click on a blank area of the screen to and wait a moment to see the updates. If you generate a map, you can simply click on the back browser button to return to this screen.

1. #1 Record the seed number, since that will be important when trying to retrieve that same map and make additional maps. The seed number identifies your random map. If you return to the page and enter that seed number, your map will be shown, instead of a new random map. Clicking on #7 button will cause this value to change randomly as well as the #2 values.

2. #2 Percent (%) water and percent (%) ice will effect how much landmass is shown compared to water. For comparison, the Earth has 71% water and around 10% ice. During ice ages, the value can become closer to 30% ice. By hitting the random button #7 it changes both the water and ice values. You can type your own values, and click in any blank area to update, to see how it changes the map.

3 #3 Geography inserts a handful of terrain, climate, and biome icons on to the map. Mountains, hills, deserts, jungle, mixed forest, coniferous forest, desert, and grasslands. There are more public domain icons that can be added at a later time such as swamps, cactus, broken terrain, volcanoes, dunes, concentrated feature areas, and mixed feature areas, which I might show you in a different post. You can select either the default 'Yes' or change it to 'No' by using the drop down menu.

Rivers inserts major rivers - not all the possible rivers. These are your Amazon, Nile, Yangtze, Danube, Ganges, Mekong, Zambezi, Volga, Mississippi, and Sepik types of rivers. They should be considered major rivers, not the only rivers. At a later post, I will show you how you can find the other rivers using the terrain and simple logic. You can select either the default 'Yes' or change it to 'No' by using the drop down menu.

4. #4 Cities and Castles can add icons for cities and castles on the map. The icons are rather large. You can select either the default 'Yes' or change it to 'No' by using the drop down menu.

5. #5 Hex Grid will add hexes to the entire map, to be used for gaming purposes. Checking the box adds the hex grid to the map. You can uncheck the box to remove the grid.

6. Button #6 Construct or simply hitting the return key [enter] will generate the map according to whatever settings you currently have. You can return to this screen, change the settings and resubmit the changes to generate altered setting maps. This feature is import in that when I generate maps,  I save several different versions of the world map, to be used in different situations.

8. Although a name is randomly place here. You can add your own name, though this doesn't actually put the name on the map anywhere.

First of all, I generate what I call the plain color map. This first map is probably the most important of all the maps to generate topography and terrain.

The settings I use to generate this type of map is geography: no, rivers: yes, cities & castles: no, hex grid: uncheck, label map: uncheck.

After generated, right click and save the map to a folder where you will be keeping all of your world maps. A folder dedicated to world maps for this world is ideal.

This map shows elevation of land from dark green to tan-yellowish, hills light brown to mountains brown. Whit is the snow capped peaks. In the water it goes from shallow light blue down to dark blue recesses of the oceans. The map should be 4000 pixels by 2000 pixes in dimension.

A small section of this map found in the left & right-hand sides that I will be using to show a close up is the lake found in the lower third along the border.

Also, at this point, save one with hex grid and geography. Be sure to name it something different. That will be used later.

For this step, I will be using GIMP, which is free. You may have Photoshop, but this will focus on using GIMP. The latest GIMP can be found free at https://www.gimp.org/.

On the main menu, go to Colors > Map > Palette Map

What you have now is a map that shows incremental elevation changes. A close up shows the difference.

If you compare especially the plain map and the layer map, you will see that this new layered map shows topographical changes better than the original plain. Everything that is the same color is at roughly the same elevation, except of course the rivers. The lakes may be somewhat higher, although I have noticed that the fractal map focuses on sea level lakes.

This next type will extrude the layers into levels. Mountains however, because the original plain map uses browns for mountains, they will be wrong. In another post, I will show how to correct the mountains to a greater degree. But for sea level up to hills, this method will be correct for 3d elevation changes. So ignore the mountains for now that result from this method.

1. Use your topography layer map that you created using the method above. 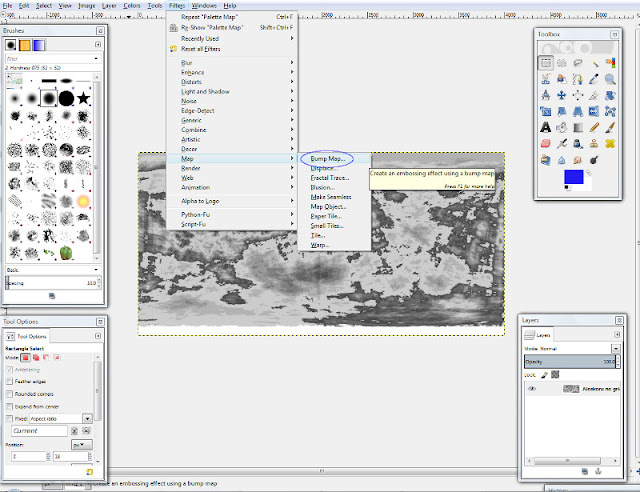 3. Make sure first that the Bump Map is the same map as your current map. When working with several maps, it may show another map as the bump map source.

Azimuth changes which direction the sun is coming from.

Here is the close up of Ekouinmanus Kapos.

Remember that mountains higher than hills will be sunken and wrong because of the browns used, which can be corrected later.