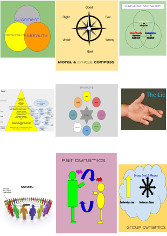 I'll now switch the series focus from characters to setting. Characters live within settings where they do stuff.

A setting is the place and time that a story takes place.

Some call the process of creating a fantasy world in both RPGs and fantasy fiction as worldbuilding. It is the process of creating an imaginary and constructed world. These are worlds that can differ from our real world. Some aspects of the world that can be created are maps, geography, geology, biology, physics, history, cultures, societies, status, ecology, creatures, monster, cosmology, mythology, architecture, fashion, languages, religions, beliefs, groups of people, organizations, magic systems, technology

For my techniques at making a geographical world, see my 6 part series on creating a world map where I show the technique that I used to create an actual map of the world using other free online tools.

I would also like to do another series just on fantasy languages at a future time. 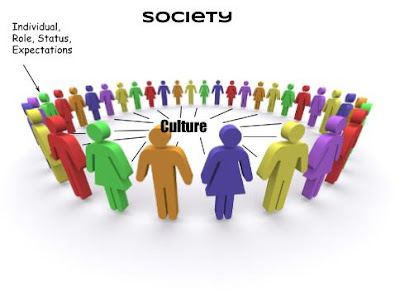 Looking through my notes of topics from various books and sources, one of the areas that I would like to delve into is cultures of societies and groups. Mostly because the amount of notes in that area are only fragments.

My overall question will be the following. How do socio-cultural forces influence characters?

Cultures are everywhere. And they come in layers.

Even if I seclude myself far away from all societies and rely upon survival techniques to survive - and never see a single person - I still may be considered part of a culture. I share with others an off-the-grid mentality of self-sufficiency, sustenance, and minimizing waste of raw materials. A knowledge of primitive skills would greatly increase chances of long term survival. In order to survive by myself I must be expected to do certain things to achieving sustenance.

In this sub-series, part of the Story vs RPG Series, I want to begin to look how these cultural forces affect a character in a game and in a story. These two mediums will be framed by evidence from sociology and social psychology. By picking culture as a focus I also am picking a topic and focus force that can come in close persistent contact with the character. Cultures may connect directly with a character's personality, ethics/morality, drives/needs, and even lies. A different approach might be from an anthropological perspective, focusing on symbols, archaeology, and adaptation.

What is a culture?

Society is a group of people interacting with each other, governed by a type of authority, with known societal expectations, and connected regionally or socially.
Culture is the way of life for a particular group of people at a particular point in time.
Individual is the quality of being a particular person separate from other people with independent needs, desires, and goals.

Societies exist around any world where groups of people (or sentient species) group together. They normally have some form of authority - some form of leadership. This authority sets rules for governing the society. Societies come to form expectations.

These societies can be historical, current, imagined futuristic, reimagined, alien, animalistic, or supernatural.

Societies normally have boundaries of their influence. Many times they are restricted to one area of the world or universe. These boundaries are normally show the paths and routes of normal interaction, communication, trade, and travel.

Here is one example of a societies borders. I lived a few years on Luzon a large island that includes Manila the Philippine Islands (Pilipinas). Manila - the capital - has the national government that oversees all the islands in the nation. The nation is divided into regions. On an island, the boundaries are very clear. The island has its own physical boundaries. However, Luzon being so large is divided into parts.

I lived in Region 3 called Central Luzon (Gitnang Luzon). Mountains bordered the northern boundary down to a large river in the south where the Metro Manila area begins. The capital of this region is the city of San Fernando. In this region most of the rice of the entire country is produced - a very important food staple in that society. This region is divided into seven provinces: Aurora, Bataan, Bulacan, Nueva Ecija, Pampanga, Tarlac, and Zambales.

A colossal volcano erupted a few months before I arrived in this region - Mt Pinatubo in 1991 - which tragically occurred at the same time as Typhoon Yunya (Diding).

In my time living there, four of those provinces - Bataan, Bulacan, Pampanga, and Zambales - is where I spent the majority of my work, travelling, and recreation. Within that area their were entirely different languages even in this smaller area : Kapampangan, Sambal, Pangasinan, Tagalog, Ilocano, and mixed with various degrees of English.

All of these boundaries - physical, languages which are social, and even behavior patterns emerging after the tragic Pinatubo & Typhoon Diding - help define the collective and individual cultures of the region and the entire nation for that time period.

All of these boundaries help set up influencing cultural elements of the early 1990s setting for Central Luzon.

Authority can be traditional recognized by a long established cultural pattern. It can also be charismatic, led by an unusually personal character that inspires others. It can also be bureaucratic governed by rules and regulations set by a form of governing body. Authorities normally create ethical rules to help control what's right and wrong.

Most of the governing bodies of different levels of the Philippine government are bureaucratic.

However, a few days ago Rodrigo "the Punisher" Duterte was elected president of the country. He is seen as a wildly charismatic political figure, sometime shown riding around on a motorcycle with a machine gun, that threatens to change the constitution and reinstate the death penalty, while other are threatening enacting martial law.

He is said to have killed over 1,000 people by death squad in his tenure as mayor of the impoverished city of Davao a far southern city on the island of Mindanao. He has claimed he will execute 100,000 criminals in the country and dump their bodies into Manila Bay, as president.

Culture describes overall societal and individual groups of people within societies. Time is one factor. Cultures in the past may have different details than current groups of people. Culture tends to change over time, due to events and the reaction of authority to those events. A culture in the future will most likely be different than today's culture. Cultures may also come and go, rather than evolve and change.

Within these societies and cultures it's important to remember that their are individuals. Each being may have independent needs, desires, and goals. These individual They may actually go against culture and authority - resisting against the forces that try to influence, persuade, regulate, and use authoritative power - to rebel.

Having introduced society, culture, and the individual, how do individual characters fit into the socio-cultural structure.

For example, many western novels have a role that can represent 'the law'. This may be a sheriff, a mayor, a bounty hunter, judge, or a ranger. Their role is to maintain law and order and to apprehend criminals and bring them to justice. That is their expectation placed on them by society and culture. Certainly some law enforcement individuals can be breaking or bending the law.

Breaking societal rules may be considered not normal. Cultures and authority dictates acceptable behavior, either directly through rules or through unwritten rules.

These roles may be assigned to them by others or voluntarily chosen by the individual.

A character voted in as a law keeper does so by choice. Whereas a person may be assigned to be a law keeper as a term of punishment. Instead of going to prison, "We will offer you this law keeping position to help round up the other criminals," in the group they belong to. Sure they can choose to reject the offer. But really their not choosing to become a law keeper by their own without the threat of punishment looming over them.

And some roles may be completely assigned without any choice.

Sometimes conflicts between multiple roles within a character may arise.

The law keeper who also has a spouse that breaks the law, may be conflicted with the role to catch criminals and the role to be a good faithful spouse. If the role of being a faithful spouse is decided to be more important the the law keeping role, they may begin to allow, help, blame on someone else, or cover up any wrong doing.

Societies and cultures may have different levels of roles based on importance and powers. This status can very from a lower status to middle status up to upper (higher) status. Cultures and authorities dictate what factors determine status according to what is most important to them.

The ultimate law keeper for the town may be the sheriff who has the powers and responsibility to arrest and lock criminals up for the town area. Maintaining a low crime rate is ultimately the sheriff's responsibility. Or law responsibility may be shared with a judge that passes judgement and sentences. Judges have the responsibility and powers to try an accused criminal and to render a verdict according to the societal laws. Certainly the deputy's status is much lower in the society compared to a sheriff or judge.

A common folk in any society may be considered the standard for what is high status in society (high society) or what is low in status.


How do view point characters evaluate other characters?

Assumptions about a person is making a judgement about the causes of one's own or another's behavior.
The person caused it assumes that a character's personality, needs, ethics, or a lie is the reason for such behavior.
Something else caused it assumes that something outside the character caused the behavior.
Behavior changes little is noticing the character behaviors the nearly the same all the time.
Behavior occurs under certain conditions is noticing that behavior changes under certain situations.

So view point characters will likely blame them for how that character behaves. At the same time they will blame their own behavior on other events, people, and situations - less likely on oneself.

If another character sees the sheriff character not apprehending a criminal, they most likely will assume and blame the sheriff for not performing the responsibility and power given to the character. Less likely will they try to imagine that some other force or reason could be preventing the sheriff from doing that expected behavior. Maybe the sheriff was just suspended.

Sometimes character will behave in a certain way consistently. At other times behavior might change when the situations change. During those certain situations when a character changes behavior, normally characters assume that an external force is creating that differing behavior.

This is great way to show that something has happened without revealing exactly what changed. By showing a character that was consistently behaving a certain way, suddenly change and behave a totally different way, suggests that something happened outside the character.

Consensus is a general agreement.

Some actions and behavior in some cultures and groups may require a general agreement - consensus.  "Let's talk this out before we do anything else," may be an indicator that some sort of consensus requirement, a social tool of controlling behavior of its members.

In the next post, I may go into group conformity, non-conformity, attitudes, or prejudice.
Posted by KW at 11:49 AM