All the changes from this page will be added to the complete master game page at A Basic System 12 (ABS12).

What you need to use this chart

In addition to the Solo Game Engine, here is my attempt at a fact generator which can be used with one 12 sided dice.

A writer might use the lists to help with inspiration.


For example. A roll of 1d12 resulting in 4 means something about sound, indicated by the ear symbol. Another roll of 1d12 equaling an 8 would indicate Loud.

Something in the story was loud.

If you need further details you could roll more.

Lets say that you pile up loud, cold, and move. If in a modern house indicate something about a loud refrigerator vibrating. In space it might be indicate something about a scream from a cryogenic chamber. In a horror story or game it might indicate a chill running down a character's back pushing the character to flee as a loud rumble shakes the ground. In a fantasy story, it might indicate the launch of an ice ball from the trigger of a trap.

It's just meant to help creativity. So use, discard, and change the results as needed. 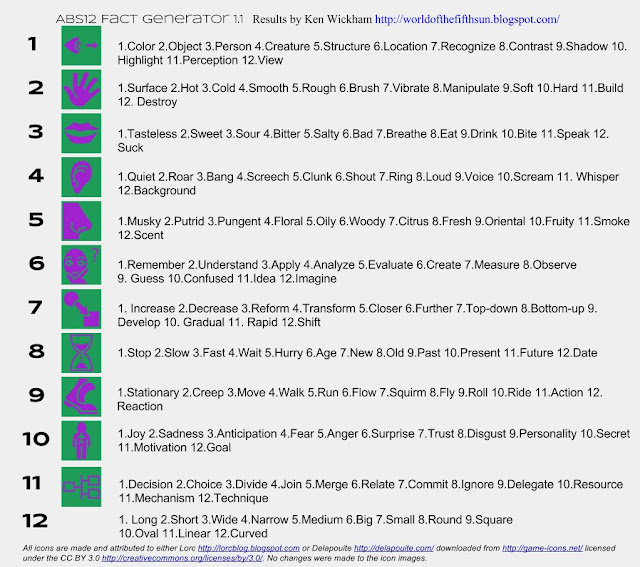 All icons are made and attributed to either Lorc http://lorcblog.blogspot.com or Delapouite http://delapouite.com/ downloaded from http://game-icons.net/ licensed under the CC BY 3.0 http://creativecommons.org/licenses/by/3.0/. No changes were made to the icon images.

This blog may not be reproduced in any form, stored in any retrieval system, or transmitted in any form by any means—electronic, mechanical, photocopy, recording, or otherwise for any other person—without prior written permission of the publisher, except as provided by United States of America copyright law.