All the changes from this page will be added to the master game page at A Basic System 12 (ABS12).


New version number
If you haven't  noticed, I upped the version now to 1.02 including everything changed or added last week. The current version is much larger than the last version update. I've added healing rules, revised the thief, added a character sheet, added more Description Verbs (skills) including new natural weapons, and added PL0 and PL1 non-humanoid creature encounters.

To round out the standard creatures for power level 1, these will be the non-humanoid creatures that most games have. 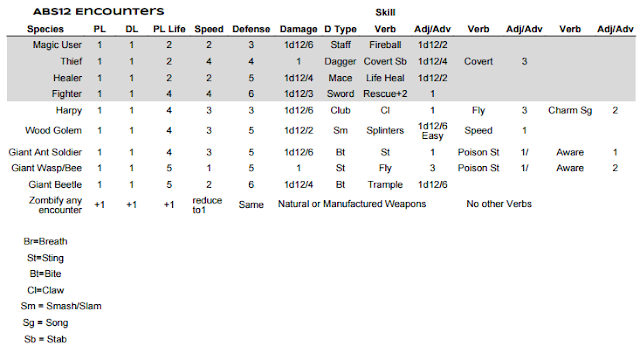 The Beetle and Wood Golem will be that main end boss type creature.
Zombies of PL0 creatures should add usability to creatures and humanoids.

Description skills
I also have to add the skill information for these creatures.
smash/slam - using fists or other appendages to forcefully attack a target.
song - this is a magical song which has some effect on another character.
splinters - ejecting several dozen razor sharp shards of wood.
trample - walking or running over another character.